Studying with ADHD: a Success Story. 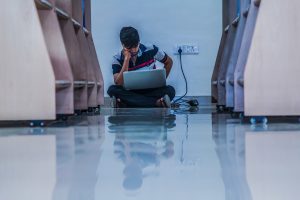 My coaching client was intelligent, creative, and committed to making the world a better place once he gained his degree. Just one thing was getting in his way; lack of understanding of how his ADHD traits were having an impact on his revision tactics for his end of year exams. ( “Revision” in the UK means “study” or “review” )

We started by precisely analysing his current approach to revision. He was certainly putting the hours in, yet no work was being done. Time was ticking by and this situation was beginning to undermine his self-esteem. His confidence in passing his exams was at a low ebb.

I started by asking him some clarifying questions, and these revealed that the environment he was attempting to study in played a big part in his difficulties both in getting started, and in maintaining focus. I discovered he was trying to study in the same environment where he lived, ate and spent time relaxing. I recommended he firstly try separating out his study area from his living area and see what happened as a result.

He agreed to check out this new strategy and came back next session full of enthusiasm at the insights he had gained. He realised as a result of this new awareness just what a key role environment did play in his ability to study and revise.

Knowing it wasn’t some kind of character flaw holding him back, but simply the way he was going about his revision, was a pivotal moment for this particular client.

After a couple of weeks of experimentation, he came to the conclusion that trying to study in his flat was not going to work for him, and he took the decision to go to the library to revise.

From there I helped my client deepen his understanding of how his ADHD trait of distractibility was hampering his efforts. I was able to identify exactly which distractions were throwing him off course and when. I encouraged him to use his strength of creativity to come up with some solutions he would enjoy putting into practice. I was also able to help him see the benefit of taking regular breaks, to refresh and recharge.

Working together we came up with a plan that worked with his ADHD traits. We tailored it to his unique circumstances, course modules, and the time he had remaining to complete his studies and revision. Armed with this new information my client was able to go from hours spent sitting staring at his book bag, beating himself up for not revising day and night, to completing a realistic goal of several hours a day of revision.

He regained confidence and was filled with new hope as he understood that completing his revision in a timely manner was now within his grasp. He was able to pass his end of year exams with a better grade than expected and was excited to share the good news with me.

You can make your study and revision easier and more productive by paying attention to these factors:

Just a few changes to your environment and work habits will pay dividends in your ability to focus and concentrate. ADHD doesn’t have to hold you back from being an excellent student.